The Relationship between The Supply And Demand For Money

Textbooks of microeconomics do not contain chapters with titles like 'the theory of the demand for refrigerators', but rather present a generalized analytic framework in terms of which the demand for any good may be treated.

There are several important reasons why the value of money calls for a separate treatise:

we have discovered money, the intermediary, leading a life of its own. Instead of acting merely as an accounting mechanism, it exerts an influence of its own on all prices. It is as if the yardstick started monkeying with the lengths. (Crowther, An Outline of Money, Nelson.)

Money refuses to be neutral: it insists on playing a role of its own, and is, therefore, different from any other commodity that waits passively for its price to be determined by the interaction of market forces.

Having qualified the rather sweeping statement of those who assert that supply and demand are the sole and simple determinants of money, we have to return to the position taken up at the beginning of this topic by admitting that (although the value of money is more complex than the value of economic goods), the supply and demand for money do exert an important influence upon its value. We must therefore examine briefly what constitutes the supply of money and the demand for money.

The Supply of Money

Bank of England notes form by far the greatest proportion of UK currency (see Fig. 16.1), although Scottish and Northern Ireland banknotes still circulate, largely within their own countries.

Both notes and coins reach the public by way of the clearing banks; if the public's liquidity preference increases, there will be increased withdrawals of notes and coins by the holders of bank accounts. To maintain a satisfactory cash float, commercial banks will obtain more notes and coins. from the Bank of England and have their accounts with the Bank debited accordingly.

The scope of the banks' powers to create money was radically transformed by the Competition and Credit Control (CCC) policy which was inaugurated in 1971.

Eligible liabilities were defined as the sterling deposit liabilities of the banking system as a whole, excluding deposits having an original maturity of over two years, plus any sterling resources obtained by switching foreign currency into sterling. 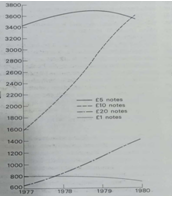 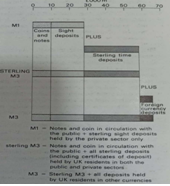 From August 1981, there have been new monetary arrangements affecting the creation of credit by the banks. The Reserve Asset Ratio (RAR) has been abolished and the foundations of the 1971 Competition and Credit Control system have been removed. There are three important reasons why the 1971 policy was abandoned after 10 years of operation.

Firstly, the RAR proved in practice to be an extremely blunt monetary instrument. It was an artificial pivot for influencing interest rates, and banking practice indicated that the RAR was largely divorced from the real world.

Secondly, the 1971 arrangements discriminated against the London clearing banks as they had maintained 1.5 percent of their eligible liabilities in the form of balances at the Bank of England. This discrimination was removed in 1981 with the underlying idea of increasing the level of competition in the banking sector as a whole.

Thirdly, the standardization of the reserve assets ratio did not take into account particular banking demands. Thus, since 1981, the liquidity ratios have been negotiated individually for each bank based on particularistic criteria. General guidelines have been formulated but within these, there is much more room for flexibility.

There are three main provisions of the system introduced in 1981. Firstly, all eligible banks, licensed sed deposit takers, trustee savings banks, and the National Giro must keep a 0.5 percent cash ratio of eligible liabilities in deposits at the Bank of England. These balances are non-interest bearing. The London clearing banks are, in addition, required to keep whatever level of operational balances at the Bank of England as deemed necessary to meet its day-to-day needs.

Secondly, there is the stipulation of a 6 percent secured money ratio of the eligible banks' eligible liabilities, including a 4 percent minimum holding with the London Discount Market Association (LDMA) (see Fig. 16.3).

Thirdly, short-term interest rates will be much more responsive to market trends with the proviso that the Bank of England will, when desired, act to fix short-term rates at some desired level, through its Open Market Operations.

The banks' power of credit creation is limited by:

The measurement of the supply of money depends on the definition of money. The Bank of England published measurements based on two official definitions. 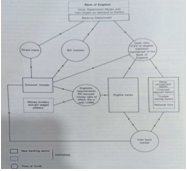 The Demand for Money

The demand is derived from three main sources:

These three sources are interrelated with each other and with other economic phenomena. Consumption, for example, is an increasing function of disposable income and is dependent upon wages, prices, and employment. Investment is related to the rate of interest and liquidity preference. Government expenditure is related to government borrowing and taxation. The demand for money is a complex subject and we have time only to explore the foothills.

The basic principle governing the demand for money is that as money is a generally accepted medium of exchange, the demand for it increases with income. The second law of Professor Parkinson that 'expenditure rises to meet income' may be humorous, and realistic to the student's experience, but it also contains a basic economic truth underlying the demand for money. If people do not hold money, then they will hold other assets, e.g., durable assets, diamonds, gold, Krugerrands, National Savings Certificates, stocks and shares, or the like. Individuals have to decide in what proportions of money or other assets to hold their wealth. The problem centers around how much money to hold and this will depend on:

The demand for money varies with liquidity preference. Keynes suggested that there are three especially important motives for holding money in the sense of an individual's preference for money over other assets.

The key issues concern, firstly, the stability of money demand, and, secondly, the results in economic terms when money demand is thrown into disequilibrium. Regarding the first point, Friedman does not attempt to argue that the demand for money is a constant. Indeed, the velocity of circulation (V) is looked upon as being subject to change. However, theoretically and empirically there is little evidence of rapid changes either in Vor money demand (Md): and it is precise because of these slow and predictable changes that the modern quantity theory is realistic and of practical application (see Topic 16.7). However, according to monetarists, the money supply is subject to rapid change. This suggests that the money stock is fed primarily by supply changes. and that money supply and money demand are independent. According to Friedman. The conclusion is that substantial changes in prices or nominal income are almost invariably the result of changes in the nominal supply of money (M. Friedman, Quantity Theory, International Encyclopaedia of the Social Sciences, vol. 10).

The independence of money supply and money demand also has ramifications for the question of interest rate effects. Monetarists are forced to contend that monetary demand is interest inelastic. If this were not the case an increase in the money supply, producing corresponding effects on interest rates, might well affect money demand, and so bring into existence a new money demand and supply equilibrium. Not only would money demand and supply then be interdependent' but one could not predict the outcome of the increased money supply, for the ratio of money demand to money income would not be disturbed. In short, one could not assume that the additional money stock would be off-loaded in the form of increased (ultimately inflationary) expenditure. 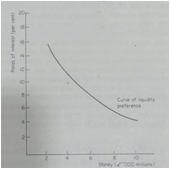 Figure 16.4 The liquidity curve indicates how much liquidity individuals demand the speculative motive at different rates of interest.

The value of money
submit your homework