The Quantity Theory has had so many ups and downs in economic thought that its resuscitation by the new monetarists in the second half of the twentieth century provides one of the most controversial and rewarding studies of the effect that money has upon prices, incomes, investment, employment, etc.

Yet the Quantity Theory, even in its rough-and-ready form, still seemed to hold good in the nineteenth century when the quantity of money in most civilized countries was based upon gold, or on bi-metallism, i.e., two metallic standards with coins of full face value, e.g., gold and silver. In Britain, the Gold Standard governed our money supply from 1821 to 1914, and a graph of price movements during this period bears out the long-term effectiveness of the Quantity Theory (see Fig. 16.5). When the supply of gold increased considerably, such as in 1849 and 1896, then prices rose rapidly and the value of money depreciated. Until 1844, the main money supply consisted of gold sovereigns, half-sovereigns, and silver coins of face value. After the Bank Charter Act of 1844, the issue of banknotes was increased but largely limited by the amount of gold held in the vaults of the Bank of England. The 1844 Act imposed a too-rigid restriction upon Britain's money supply and the Bank of England had to be relieved of its obligations to have its banknote supply tied too closely to the gold supply three times in the quarter of a century following the Act, i.e., in 1847, 1856, and 1866. The special dispensations to increase the money supply, over and above that which accorded with the Bank's gold supply, were for comparatively minor amounts and short periods. As a general rule, the Gold Standard worked and the Quantity Theory appeared to be vindicated. 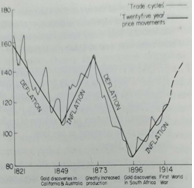 The American economist, Irving Fisher (1867 1947), in The Purchasing Power of Money (Macmillan, 1911), modified the crude Quantity Theory by introducing two new variables and mulating the Equation of Exchange which stated that:

M = Money (the total amount of money in existence)

V = Velocity of circulation (the average number of times that a unit of money changes hands in a given period, e.g., how many times a pound circulates in one year)

T= Transactions (the volume of transactions that have taken place in a given period, e.g., a year)

Although it had been realized that there was a close relationship between the quantity of money and the level of prices, Fisher was the first economist to analyze this relationship in any detail. Some critics have argued that the Quantity Theory is merely a truism since, in aggregation throughout the economy, the value of sales must equal the value of receipts. They have argued that MV does not equal PT, but MV is PT; it is merely a case of tautology. Such criticism misses the whole point of Fisher's analysis. Fisher not only formulated the equation but found that detailed analysis of the four variable quantities (M, V, P, and T) allowed him to interpret more profoundly the part played by each of the four variables. Apart from the mere quantity of money, the rate at which money circulates (V) and the output of economic goods and services (T) also influence the value of money. Fisher maintained faith in the Quantity Theory by contending that in equilibrium conditions the price level is determined by, and is proportionate to, the existing quantity of money. In an equilibrium economy, we can assume that V is independent of the other three variables and that T may be taken as given. If we place bars over V and T to indicate that they are constant when in equilibrium, then:

Fisher was still absorbed with M being the main determinant of the general price level:

When V and T are taken as constant, the proposition put forward in Topic 16.1 prevails. The supply of money, at any given moment, is fixed and the demand for money must be equal to the supply; the demand for money is large dependent upon the value of the transactions to be made.

If the value of money is considered in terms of the velocity of circulation or the demand function that links money balances to the volume of transactions, our analysis must probe deeper into the question, what determines the rate of circulation of money or the money transaction ratio?

If the number of money increases, one might expect from the formula MVPT that the velocity of circulation would decrease but empirically this is not universally true. One school of economists holds that the four variables are interdependent and not independent. A change in one variable is likely to bring about a change in all the others although to what degree it is impossible to predict .

Fisher's analysis of the Quantity Theory has been criticized on other grounds:

Fisher's approach to monetary economics has much to recommend it for by postulating that the demand for money arises as a result of individuals' need to trade with others, it links the demand for money to the volume of trade going on in an economy at any time... (The Demand for Money.)

Fisher's Equation of Exchange has stood the test of time better than most aspects of economic analysis. In economics, the heresy of today often becomes the 'conventional wisdom' of tomorrow, only to be regarded later as the work of defunct economists. But it is unwise ever to disregard a heresy of a previous generation; it may be given new life when the pendulum of economic thought swings back.

The counter-revolution in monetary economics stemmed from revitalizing the importance of the Quantity Theory and has been largely the work of the Chicago School of twentieth-century monetary economists led by the controversial American economist Dr. Milton Friedman. But as Friedman himself pointed out, in the First Wincott Memorial Lecture at the University of London:

A counter-revolution, whether in politics or science, never restores the initial situation. It always produces a situation that has some similarity to the initial one but is also strongly influenced by the intervening revolution. That is certainly true of monetarism which has benefited much from Keynes's work.