Balance of payments : Surplus and Deficit

Table 9.1 gives a breakdown of the UK's balance of payments from 1976 to 1980. The most important balance is the current account balance. 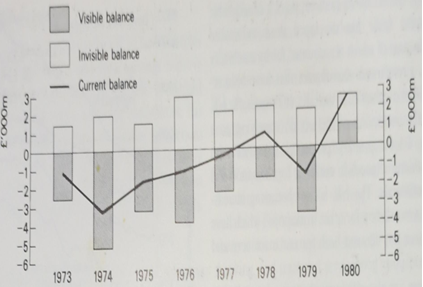 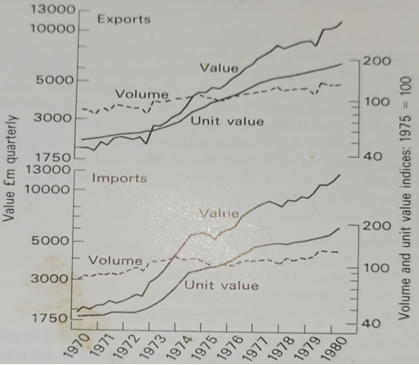 There have been two main changes in the distribution of UK exports, in the last two decades:

In recent years, there has been a significant rise in the proportion of imports of manufactured goods (now about 35 per cent in value terms) and semi-manufactured goods (28 per cent of total imports). Imports of petroleum and petroleum products are likely to fall in both value and volume, reflecting the increasing production of North Sea oil. In 1980, they amounted to about 10 per cent of UK imports. The UK's imports may be divided conveniently into five sections:

You may come across the initials 'f.o.b.' and 'c.i.f." when studying international trade imports and exports. 'Fob' means free on board (i.e., the value of the goods when they are shipped) while 'cif' means that the price includes cost, insurance, and freight. 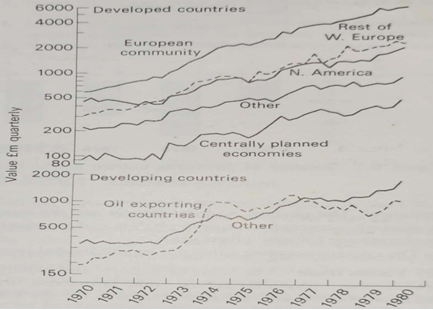 Fortunately, it is usual for the UK to have a surplus balance on invisible, and these earnings improve our current account situation. The UK, in contrast to many of its major exporting competitors, has earned a persistent surplus on invisible transactions for at least 200 years. Only the USA earns more gross income from invisible than the UK, and these two countries dominate the field of invisible exports. The main invisible items are given below. 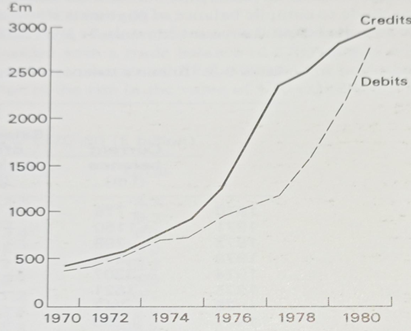 For many years there was increasing dissatisfaction with the traditional form of the balance of payments format. The principal objection to the conventional method was that the balance of payments 'pseudo problem', to use the term adopted by Samuel Brittan in The Price of Economic Freedom (Macmillan), dominated political and economic arguments to an unwarranted extent. Assertions that Britain was near bankruptcy were not made in the nineteenth century because at that time no serious attempts were made to compile balance of payments statistics. The so-called capital account can only be a yardstick over a long period. The famous or infamous 1964 deficit of over £700 million was a short-term problem and much of the deficit was brought about by capital outputs that later brought a return in capital inputs.

In recent years, the current account has been given more emphasis and capital movements have been shown separately (see Table 9.1).

Currency flow represents the inflow of foreign funds into the UK and the outflow of currency from this country to overseas countries. To have a complete picture of the balance of payments we must examine official financing (see Table 9.3). Official financing shows how currency flow is financed. In Table 9.3, certain amounts are marked with a plus sign: this means that money is coming into the country and the plus sign indicates an addition to our supply of foreign currency reserves, capital, money for investment, gold, or special drawing rights (SDRs are a type of paper gold introduced because of the shortage of world liquidity, i.e., money to finance world trade). Other amounts are marked with a minus sign to show that currency is flowing out of the country.

A plus or a minus sign may be a good or bad thing for the country. A plus sign may mean that currency is flowing into the country in the form of overseas investment, and that American firms such as Chryslers, Fords, or General Motors have taken over a large share of our motor industry, once owned by British firms. A minus sign may mean the UK has fulfilled her obligations to the IMF by paying her subscriptions in gold. So it would not be correct to treat a plus sign as necessarily favourable to the UK. It is sufficient to realize that in the short run the current account need not show an annual favourable balance, but in the long run, we must attempt to make it balance. This we try to do by taking measures to correct our balance of payments, so that our currency flows out in a useful way, e.g., to pay old debts or to be invested for productive purposes to earn foreign currency.

Table 9.3 Britain's balance of payments including official financing from 1970 to 1980

Trends in the UK balance of payments

A detailed examination of the current account section of the UK balance of payments (see Table 9.1) reveals that:

There are underlying factors that ought to be considered in detail because they reveal trends likely to affect the UK balance of payments in future years. Although no trade figures appeared for six months up to September 1981 (owing to a Civil Service dispute), the favourable trend has continued. The surplus on visible trade alone reached a remarkable surplus of over £1000 million for January and February 1981 (see Fig. 9.5), while the invisible surplus was £1300 million for the first quarter. The overall trend for the first quarter of 1981 was in the order of £3000 million.

The UK's favourable current balance in 1980 coincided with a trade balance of £700 million with the other countries of EEC. Oil was an important factor in the rise in the value of UK exports, but so was the performance of the British manufacturing industry. UK's trade with the rest of the EEC amounted to 43 per cent of its trade with the world as a whole; if the UK continued to have a surplus with the EEC then this would be an important and healthy reversal of previous trends (see Table 9.4).

Paradoxically, the UK balance of payments surplus in the eighties was in no small part due to the recession, which has meant that British companies have ordered fewer raw materials and other factor inputs from foreign countries. Hence there was an approximate 11 per cent fall in the volume of UK imports in 1980. There was a corresponding fall of about 2 per cent in our exports, but exports held up remarkably well considering the strength of the sterling. Export figures have been improved by oil exports, which moved into the black in 1980. In terms of the overall effect on the UK balance of payments, the influence of UK oil wealth upon investment and other capital flow accounts is very significant. Several possible explanations have been suggested to account for the paradoxical strength of UK exports in 1980 in the face of the rising pound. These include:

By the end of 1982, for the first time since the end of the Second World War, the UK achieved a surplus with the rest of the world on trade in goods (ie., visible trade) for three consecutive years. This was mainly caused by our surplus on oil trade, which now adds to our traditional surplus on manufactured goods. Invisible trade in services continues to flourish and accounts for about a quarter of total UK exports. Our main problem is the continued increase in imports of manufactured goods.

Balance of payments : Country’s inflow and Outflow
submit your homework