Different types of demand and supply

The various interrelated demands and interrelated supplies will for convenience and brevity be considered under three headings: definition, examples, and the effect upon prices. Hire the best economics homework help experts for tutoring on the topic and better understanding.

Demand and supply curves can be drawn to illustrate the effect on prices. As economists, it is our main concern to study the effect of these demand and supply interrelationships on price changes. When a few of these curves have been drawn to illustrate price movements, the student will be aware that they form similar patterns and should have little difficulty in drawing further curves for himself.

Table 10.1 Types of supply and demand

There are three main concepts of elasticity used in economics:

Price elasticity is an expression of the relationship between changes in price and changes in the quantities demanded or supplied (see Figs 10.10 and 10.11) 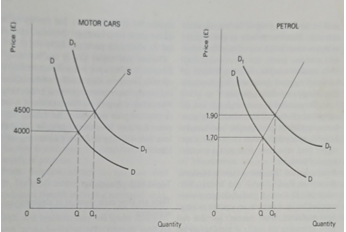 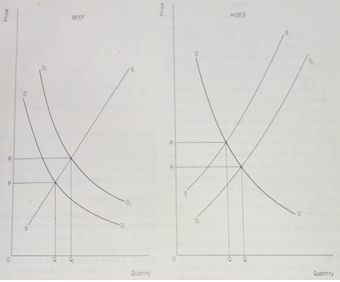 Luxury goods tend to be in relatively elastic demand, while goods considered by consumers to be 'necessities', such as salt, follow a pattern of inelastic demand. However, one hesitates to classify goods as 'luxuries' and 'necessities', for the luxury of today is the necessity of tomorrow. As people move from a subsistence level to a 'car standard' (or a two-car standard), the car may come to be considered indispensable. Similarly, it is dangerous to make a simple dichotomy between 'luxuries' and 'necessities' from the yardstick of what is essential for the maintenance of life itself. The bread was once the staff of life, but the affluent family of today may eat very little bread. On the other hand, an individual may consider health-hazard products, such as cigarettes and hard drugs, as necessities. Economists are concerned with value judgements only so far as their effect influences the elasticity of demand and prices.

In the same way that the elasticity of demand measures the change in the quantity demanded dependent upon price changes, the elasticity of supply measures the changes in the quantity supplied brought about by slight changes in selling prices. Once more, the elastic curves tend to be flat and the inelastic curves tend to be steeper. An important difference between the elasticity of demand and the elasticity of supply is that the response to changes in price will cause a quicker change in the quantity demanded than in the amount supplied. It is comparatively difficult to alter the basis of supply. Supply precedes demand and is in anticipation of it. If there are bonanza profits to be made from rapidly rising prices of butter, it may take the manufacturer or producer months or even years to respond to that increase. The more specific the commodity being supplied, the more inelastic will be supplied. It may take seven years to build a nuclear power station or to complete the training of a surgeon.

The term 'economic rent' is used to describe the inelasticity of the supply of land, labour, capital, or organizing ability. The concept of rent in an economic context has been widened from its original use as a term that described the surplus income derived from superior land, i.e., 'Ricardian rent'. David Ricardo fulfilled a service to economics by stressing that 'rent' was a surplus. He confined his arguments merely to the supply of land that he regarded as in fixed supply, but although the land was in inelastic supply it could be put to alternative uses. Inferior land was at the margin of cultivation, and any land that was superior to this marginal land gained for the land owner a rent which was the reward, not of sacrifice or service, but of ownership-merely a fortuitous income arising from the possession of something that was in inelastic supply.

Later economists realized that other factors of production or economic goods could gain a surplus or economic rent. Capital, especially in the form of new machinery, could gain a temporary rent, termed quasi-rent by Alfred Marshall. Quasi-rent relates to a temporary increase in income caused by an increase in demand that cannot be met by a sudden increase in supply. Quasi-rent earned is likely to be only temporary because the passage of time will remove the special advantages leading to excess earnings.

Economic rent is the amount paid to any factor of production over and above the sum that is required to keep the factor in that particular line of production in which it is engaged. Before a supplier can obtain the use of any factor of production, he must pay at least as much as the factor could earn in any suitable alternative employment. This is known as the transfer cost, i.e., 'the best earnings elsewhere". Economic rent is considered in the context of inelasticity of supply since it is only because some factors of production are in limited supply, either in the short run or the long run, that economic rent occurs. Economic rent can, therefore, be applied to labour or any other factor that is in inelastic supply. If a successful heart transplant surgeon were to sell his services in the most lucrative manner, he would receive a surplus payment or rent of ability, because his particular knowledge and skill are in inelastic supply.

Although elasticity is frequently considered in terms of demand (or supply) being elastic, inelastic, or unit elasticity, it is not necessary to think merely in terms of these three extremes. It is possible to have any degree of elasticity, in the same way as you can have any degree of temperature. Economists call late degrees of elasticity and signify them by a number termed the coefficient of elasticity. A. A. Walters, in An Introduction to Econometrics (Macmillan), points out: Compared with other social scientists, one of the main advantages enjoyed by the economist is that he deals with phenomena which are normally measurable. One such complex measurement is the coefficient of elasticity.

A demand or supply) the curve is not always relatively elastic, relatively inelastic, or of unit elasticity throughout its whole length. By calculating the coefficient of elasticity from a normal demand schedule it is possible to determine the elasticity of a curve at any given point along that curve (see Fig. 10.12).

Greater than zero but less than one = inelastic demand (or supply)

Greater than one but less than infinity = elastic demand (or supply)

Equal to one = unitary elastic demand (or supply) 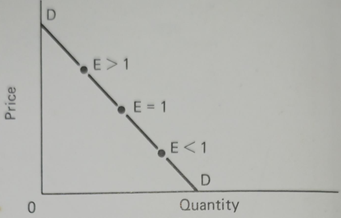 As the concept of demand in economics always relates to effective demand (not merely willing and wanting, but having the wherewithal), changes in incomes (in addition to changes in prices) will affect demand. Income elasticity is the response to the demand for a commodity that occurs with changes in the income of consumers. 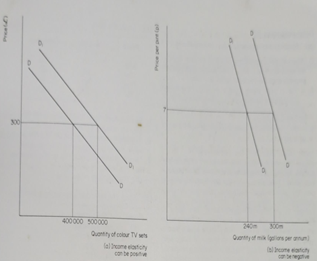 Cross elasticity is the responsiveness of demand to changes in the prices of other commodities. For example, if the goods are substitutes, e.g., tea and coffee:

Percentage change in the quantity of tea demanded

Percentage change in the price of coffee demanded

Proportionate change in demand for commodity A

Proportionate change in price for commodity B

Various types of demand and supply
submit your homework